Narrowing down the best route for the cycleway from Island Bay to the City is a tough job, and there’s many considerations that need to be taken into account. CAW has attempted to come up with a possible solution. But first, please read how and why we choose this route.

Considerations for cyclists (especially those not so confident or new):

The Easy Bit: Stage 1 – The Parade

WCC had already decided that this stage would go straight down The Parade. It makes sense: it’s wide, direct, flat and accesses shops and parks. We agree, and recommend the use of kerbside protected lanes with adequate buffer zones. We are also working on ideas on how to make intersections safer. See the Intersections page for some details on that.

We looked at which routes are currently popular with cyclists and which types of cyclists choose which routes. We also looked at key destinations, topography and gradients, directness and accessibility. Traffic flows and the bus routes are also a consideration.

Many current commuter cyclists go straight over Adelaide Road, avoiding Newtown altogether. This route is direct, but narrow, with lots of parked cars, heavy traffic, and it climbs higher than the other on road options.

Another option is to turn right at Luxford Street, and left onto Rintoul Street; this route is the least hilly, has less traffic, connects with SWIS and through the north end of Newtown. It also goes along the bus route, and probably the BRT route.

A third option is to go via Luxford St, Rintoul St and turn right onto Waripori, then down Russell Terrace and onto Riddiford St. This takes you through the heart of Newtown and past SWIS. It also has more traffic lights, more pedestrians, a steep climb on Waripori and Russell Terrace and is less direct for commuters through town.

WCC is also considering using parts of the town belt to create off road cycle tracks. These would be completely separated from cars for at least parts of the journey, which would make them more suitable for kids and recreational riders than on road options. However, we’d be concerned about lighting and safety after dark, track maintenance and connections back to roads.

We looked briefly at the ‘Western’ option. This could head off road near the Mornington Golf Club rooms, and head through the town belt, possibly via Stanley Street for a stretch to MacAlister Park, then onto Hanson St. This option is hilly. Also traffic around Stanley St is dense, and there would almost certainly be conflict with school traffic at Berhampore School. The biggest argument for us against this route, is that it doesn’t connect with Newtown at all, or the eastern part of Berhampore.

We also considered the ‘Eastern’ route. This is proposed to turn off near Dover St and go through the Golf course to Martin Luckie Park and connect with Russell Terrace. We’ve looked at a variety of different routes through the golf course and there are different options which could be considered. While we think this option would be ideal for SWIS students coming from Island Bay, it doesn’t connect well with Berhampore. It would also climb higher than the on road options and be relatively twisty and long to get through the golf course without crossing fairways or being too steep. The cost of a wide, lit path through here would be substantial, but a narrower unlit path suitable for SWIS students and recreational riders heading to Mt Vic’s trails, Burkes, Newtown Park, the Zoo, and the Miramar Trails should be considered.  If going over Adelaide Rd is the selected route, then this would also be a useful link to Newtown Shops.

Weighing up all of these options, and other variations not discussed here, we’re proposing the following:

The main route follows that used by the more ‘tentative’ cyclists now; Adelaide Road, Luxford St, Rintoul St to Riddiford and John. This has the least steep gradients and the lowest climb of all the options while still being direct. It goes past shopping areas and schools, and is accessible to all three suburbs.

The following roads should be wide enough for protected kerbside lanes with no or limited removal of parking:

The following streets may not be quite wide enough for protected lanes on both sides:

If lanes on both sides of the road aren’t possible, we’d suggest uphill protected bike lanes (where the speed differential is greatest between cyclists and cars, creating more conflict or potential for accidents), and downhill ‘sharrows’.

Sharrows are being trialled around the country and have been used overseas. They are bike symbols with an arrow, indicating that cyclists should take the lane and keep away from car doors. They are ideal for situations, such as on downhills or in shared slow spaces, where the speed difference between cyclists and motor vehicles isn’t too big.

For the Berhampore shops (and the Newtown shops in future), we would recommend an effective slow shared space. Reducing the speed limit to 30km/h and creating traffic calming, such as cobblestones (used on Lambton Quay) and street furniture, which makes the area more attractive to pedestrians, cyclists and shoppers. This would not only benefit cyclists, but hopefully pedestrians and the retail area, as well as making it easier and less stressful for drivers to get into and out of car parks. While removing carparks for a bike lane was briefly considered, we decided against it, as there are no obvious alternatives to current parks for businesses and residents, and a shared space would already be a massive improvement on the current situation.

We would also encourage the Council to consider a second route through the Golf Course (whether that is our preferred more direct route, which would involve moving two fairways, or a twistier route which reduces the effect on the golf course) to Russell Terrace for SWIS students and recreational riders. This wouldn’t need to be as wide as a main commuter route, reducing estimated costs substantially.

It should be noted that cycleways through golf courses are fairly common in New Zealand. Walkers already enjoy strolling through the golf course and we don’t see there being any more danger to cyclists (wearing helmets) than there currently is to walkers. Also, some cyclists already use the golf course as a shortcut heading south, and a proper bike path will restrict them to one route only, lessening any disturbance to golfers. 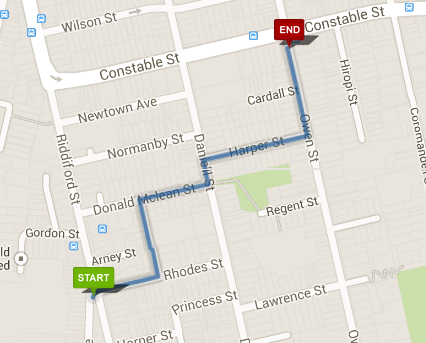 From Russell Terrace to Constable Street there is already a traffic calmed route which could then connect to Kilbirnie. Riddiford Street could be made more pleasant and safer by reducing the speed limit to 30km/h from 40m/h. This would provide much more connectivity and usability for people travelling between suburbs.

We welcome your feedback. This is a work in progress and we want it to work for the community, as well as commuters. Please email cyclingwgtn[at]gmail.com

Please see below for a diagram of this plan.