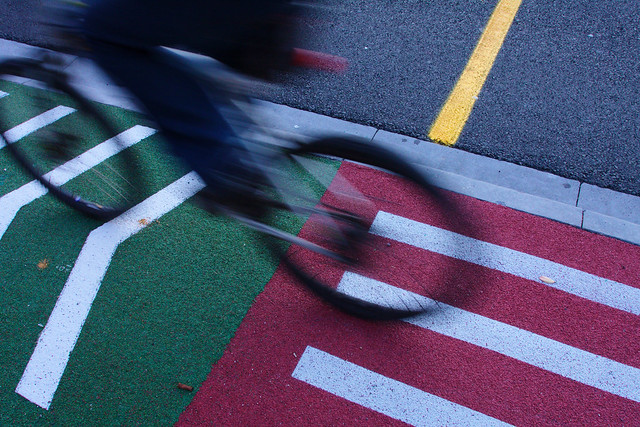 When the Victoria Street Transformation was announced, the lack of provision for cycling raised concerns. Although the aim was to create “a vibrant inner city neighbourhood” and improve efficiency for all modes of transport including cyclists, there were no specific improvements for cycling.  As a result of lobbying by Cycle Aware Wellington among others, the final result has included cycle lanes.  What has the end result meant for cycling?

Will these cycle lanes encourage the “interested but concerned” to take up cycle commuting? Probably not, since the carside cycle lanes don’t offer protection from traffic, and the kerbside cycle lane is too short. But making provision for cycling shows that cycling is a legitimate travel mode, and that can’t be bad.

The value of the Victoria St cycle lanes is that we’re learning how to design cycle facilities suitable for Wellington. One of the trickiest parts of the kerbside cycle lane is the bus stop, where the cycle lane runs between the bus stop waiting area and the stopped bus. All the cycle routes in the network proposed in the WCC Cycling Framework will need to get past bus stops – around 20 between Island Bay and the CBD for example. Ideally protected cycle lanes will have a proper bypass so that bus passengers don’t have to cross the cycle lane to board a bus. But there might not be room for this in some cases, so it’s useful to see how the Victoria St bus stop works in practice. So far it seems to work – it’s a relatively low use bus stop, and there don’t seem to have been problems. We also need to think about relative risk. A proportion of bus passengers are going to cross the road after alighting – is the risk of crossing the bike lane really that much more than crossing a busy multi lane road?

Because of concerns about passenger safety, the Victoria Street bus stop also has a lot of signage: give way signs, flashing lights, red surfacing. Maybe as we get used to kerbside bike lanes, this amount of signage won’t be necessary.

Kerbside bike lanes need to have a buffer zone between the parked cars and the cycle lane, so that passengers don’t exit parked cars into the cycle lane. In the Victoria St kerbside lane, the buffer zone is very minimal, about 0.5m. And the buffer zone doesn’t continue through the bus stop, where it would be useful for passengers alighting from the bus. There also seems to be an issue with car drivers thinking that parked cars are part of the traffic queue, but of course this is unrelated to the kerbside bike lane.

We’re also learning that getting bikes past left turning traffic is tricky.

The carside bike lanes continue right up to the intersection advance stop boxes at Ghuznee and Vivian, which is good. Many bike lanes stop before intersections, which is crazy since intersections are where collisions happen. The downside of the Victoria Street carside lanes is that left turning motor vehicles are prone to block the cycle lane, either because they turn into the left turning lane when there isn’t enough room to complete the manoeuvre, or because the fact that they’re turning through more than 90 degrees (Vivian and Ghuznee streets aren’t exactly at right angles to Victoria Street) means that drivers swing wide into the cycle lane. Providing longer left turn lanes by removing parking, and widening the left turn lane, along with education of motorists, could solve this problem.

At Abel Smith Street, there’s a separate phase for bikes in the traffic light sequence. This means bikes can get a head start on the general traffic, particularly useful for Aro Valley bound cyclists who have change lanes. However at this intersection left turning cars cross the cycle lane at an oblique angle and need to be alert to cyclists going straight through. While taking photos for this blog, I saw a (fortunately low speed) collision between a left turning taxi and a straight ahead cyclist. Ideally the cycle lane would turn in to Abel Smith Street a bit, so that the left turning traffic would cross at right angles, with better visibility, as is done in Holland. In any case, this could be less of a problem if more protected bike lanes are built, and drivers become used to crossing them.

The big lesson from Victoria Street is the value of agile bike facility design – the Memorial Park team listened to cyclists, and went ahead with innovative solutions. OK, they may not be perfect, and other projects will do it differently. But that’s the point – by going ahead and doing it, we’ve learnt lessons that can be applied to other projects, rather than getting bogged down in paralysis by analysis and not achieving anything.