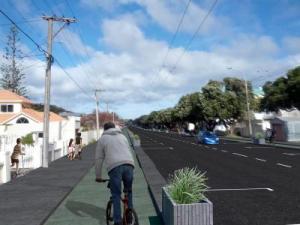 Wednesday’s Council meeting saw three big wins for cycling – approval for the Cycling Framework, and the go-ahead for the Island Bay Cycleway, the first stage of the southern cycle route from Island Bay to the CBD. Also a cycling budget of $58 million over 10 years was approved in the Long Term Plan.

The Cycling Framework was approved unanimously  – as one comment on Twitter said “Councillors now clambering over each other in their enthusiasm to be on the cycling working party!”. so there’s no doubt that Councillors are keen to be seen as pro-cycling.

There was less agreement over the Island Bay Cycleway. Several Councillors felt that local residents views had been ignored, and were concerned that the connection to the CBD had not yet been finalised. However a majority of Councillors felt that it was important that this flagship project go ahead, to encourage more cycling within Island Bay, and the proposal passed 8-6

Although Councillor Ritchie spoke in the debate, she was absent for the vote.

Where to now? It’s important to complete the Island Bay to CBD cycle route, but another high priority route is the Thorndon to Ngauranga Cyclepath – this has high usage and a poor safety record. An indication of the issues on this route came in the public participation for Wednesday’s Council meeting. A business owner on Thorndon Quay was keen to see the Thorndon to Ngauranga Cyclepath routed along Aotea Quay – so that she didn’t lose parking outside her business.